In one sense, the ‘Biden Bus Incident’ is just an altercation between two vehicles but in other sense it is a microcosm of the entire Trump Presidency. On October 30th, a parade of Trump supporters ‘escorted’ the Biden bus through Texas. Trucks with Trump flags and American flags drove in front and behind the bus for much of its trip through Texas. Some people found this funny and others thought it was inappropriate but regardless, the Trump supporters did nothing wrong.

Two fake narratives developed around the escort. The first was that the Trump supporters tried to “run the Biden bus off the road.” This message was put out by the Biden campaign and many #FakeNews organizations ran with it unverified as a headline even. There are dozens so here is just one from Yahoo News. Headline: “Video: Trump Supporters Allegedly Tried to Run Biden Bus ‘Off the Road’” Inside this article as with the others there is no video of Trump supporters trying to run the Biden Bus off the road. That did not happen, instantly making dozens of headlines fake. Inside there are quotes claiming Trump supporters “ran into a person’s car”, was “ramming volunteer vehicles.” “Here is video of one of the Trump supporter trucks ramming the escort vehicle to the Biden/Harris campaign bus.”

What they are talking about is an incident that happened behind the bus. There are two videos of what happened from different angles. Neither support the #FakeNews narrative being pushed. What they both show is a white SUV (which is the Biden campaign vehicle) following the bus. The SUV moves from the right lane to the middle lane. The Trump supporter black truck moves forward to ride behind the bus. The SUV decides it wants to come back into the right lane where the black truck now is. The white SUV crosses into the right lane over the lines and rides there very close to the black truck (in HIS lane) trying to get it to move back or off the road. The black truck does not move. The white SUV then keeps moving further right until it initiates contact with the truck in the truck’s lane. The white SUV is clearly trying to force the truck off the road to the right, but it will not be bullied. And even though for a second it looked like it was losing control, it pushed back left to get the SUV back into its own lane.

There is no disputing that the black truck was fully in the right lane for some time before the SUV crossed over into that lane and initiated contact. Here are some still shots of the incident but also watch the videos. 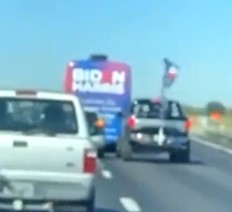 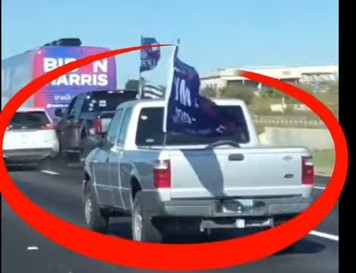 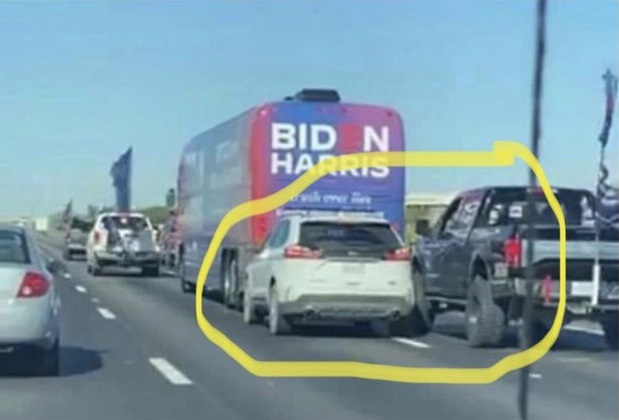 How is this incident analogous to the last 4 years? So many ways… Whereas the Republicans of old never really fought back against unfair Democratic Party attacks (think George W. Bush), Trump never backs down and always hits back. President Trump never or almost never starts the confrontations but just like that truck driver, he does not let Democrats push him around. When he does hit back, Democrats cry foul, just like they are doing in this incident.

Think of how upset Democrats were when Trump criticized John Lewis in January of 2017. But why did he do that? He was never going to mention John Lewis until Lewis said, “I don't see this President-elect as a legitimate president” and convinced other Democrats to rudely skip Trump’s inauguration. Never had an incoming President been shown such disrespect but when Trump responded with the mild, “Congressman John Lewis should spend more time on fixing and helping his district, which is in horrible shape and falling apart (not to mention crime infested) rather than falsely complaining about the election results,” he is called disrespectful and uncivil. Another time a sitting member of Congress publicly called President Trump a “motherfucker”. Trump had never mentioned this person until she did that but when he responded, Democrats screamed that Trump was uncivil, not the person who called him a motherfucker.

The other way this incident is a perfect microcosm of the Trump Presidency is that all of the #FakeNews narratives pushed by Democrats about Trump and his supporters are not merely false; they are the exact opposite of the truth.” Here, the narrative is that a Trump supporter tried to run a Biden vehicle off the road but the opposite is the truth. The Biden vehicle tried to run the Trump vehicle off the road. Let’s review some of the big issues of the last few years to see how often this happens.

Trump was accused of cheating in the 2016 election but it was Hillary who was caught cheating, TWICE. First Hillary and the DNC were caught rigging the nomination against Bernie Sanders. Then Donna Brazile is caught feeding the Clinton Campaign debate questions from CNN prior to the CNN debate.

Trump was accused of colluding with the Russians to win the 2016 election. But it turned out to be Hillary who used foreign intelligence including dis-intel from Russia against the Trump campaign. Hillary hired Christopher Steele, an MI6 guy to compile a phony dossier composed quite a bit of Russian disinformation.

Trump was impeached for allegedly doing something that Joe Biden actually did. They falsely claimed Trump demanded a ‘quid pro quo’ from Ukraine. The released transcript showed he did not, but videos showed Biden actually did just that. Biden told Ukraine, “I said ‘You're not getting the billion. I'm leaving in six hours. If the prosecutor is not fired, you're not getting the money.’ Well, son of a bitch, he got fired,” Biden laughed. Joe Biden bragged about a textbook ‘quid pro quo’ involving a billion dollars of United States money in exchange for firing the prosecutor that is investigating his son’s company. Trump says, “You might want to look into that,” and he is accused of the quid pro quo. See this article for all of the details.

Over the last few years, Trump and his supporters have been accused of Anti-Semitism. First they were blamed for thousands of Jewish Community Center bomb threats. Those turned out to be done mostly by two individuals, neither of which were Trump supporters. Dozens of violent Anti-Semitic attacks occurred in New York and New Jersey including the Jersey City kosher grocery store attack and the The Monsey Hanukkah stabbing. Mayor de Blasio and Rashida Tlaib both blamed ‘white supremacy’ and Trump for these attacks even though not a single one of the attackers was even white. Again, their lies are not just false. They are the exact opposite of the truth. See this article for all of the details.

The alleged ‘police brutality’ events that BLM and Antia have been rioting, burning and looting over for several months now are almost never how the #FakeNews narrative describes them. In almost all of the cases where we are told that the police shot or killed a black person because of racism, the suspects had been fighting with the cops, shooting at the cops, charging at the cops with a knife, reaching for a weapon in a car instead of freezing at told, etc. These are all circumstances that should get a suspect shot for the safety of the police and the public. These are all circumstances that get white people and other groups of people shot all the time. The #FakeNews media proves the narrative that the police are racist against black people by simply ignoring all of the (many more) cases where the same things happen to white people under the same circumstances.

The Covington kids were falsely accused of all kinds of vile things. Not only did they not do those things, but the alleged ‘heros’ of the #FakeNews narrative were the ones doing all of the things the Covington kids were accused of. Democrats and the #FakeNews accused the Covington kids of being racist to the Black Hebrew Israelites but as usual the truth was the opposite. The Black Israelites were not just racist to the Covington Kids, they displayed blatant homophobia, misogyny and insulted the Indians. The kids were accused of surrounding and harassing the Indians but the truth was that the Indians went up to them and started banging drum in their face for reasons the kids did not even understand.

Democrats and the #FakeNews tried to destroy Bret Kavanaugh’s life with ridiculous accusations that not only had zero evidence but most had to be retracted for being pure lies. They paraded around Julie Swetnick who claimed Kavanaugh was really a secrete serial gang rapist. Kamala Harris presented a letter claiming that Kavanaugh and a friend repeatedly raped a 'Jane Doe' in a car. Judy Munro-Leighton who accused Kavanaugh of rape now admits she never even met him. She became the 4th person Senator Grassley referred to the FBI for criminal prosecution for making false statements to the Senate committee. People were caught lying left and right but Kavanaugh supporters were called 'rape apologists' for supporting him. Then to top it off, none of the Democrats believe Tara Reade who claims Joe Biden sexually assaulted her. Reade actually worked for Biden but the Democrats demanded that all of Kavanaugh accusers be believed, even though there is no evidence that Kavanaugh ever even met any of them. The Republicans of old may well have caved on the Kavanaugh fight, but Trump does not back down, and so now neither do they.

President Trump is falsely accused of mishandling the Coronavirus. But this article shows how most of the mishandling that happened in the U.S. was by Democrats. The U.S. response is better than many European countries and would have been even better if not for the mistakes made by a few blue states, especially New York. 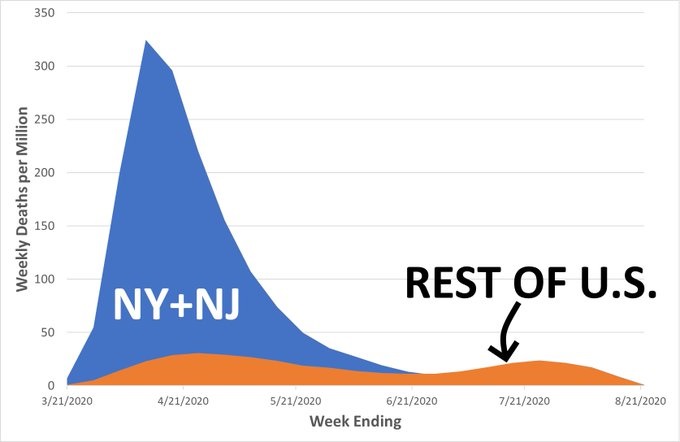 We could go on and on with examples. There are many narratives about how Republicans and Trump supporters are violent, yet 99% of the violence over the last few years has come from Democrats and the left. See the Violent Left tag on WhatHappened.com. It currently catalogs over 735 examples of Democrats and left wing activists using violence for political gain. It rarely happens the other way.

The lies of the Democratic party and their enablers in the Fake News media are not small. They are usually the exact opposite of the truth. Democrats continue to try to bully and silence Trump and his supporters. But Trump does not take their bullying and hits back against their false narratives. Like that truck driver who did not back down, the new ‘Trump Republicans’ will not be bullied either.