Is President Trump a Racist?

Democrats often assert that President Trump is a ‘racist’. The problem is that all of the examples that they commonly give to back up that claim are false. Donald Trump has been a public figure, liked by New York liberals and other celebrities, for the better part of half a century. No one was calling him a racist until he wanted to run for President as a Republican. Republicans are used to being falsely accused of racism. It happens every day. For eight years or so, in general, any criticism of President Obama was considered to be racist almost by definition because he is black. In every circumstance, they imagined that if Obama were white, he would not be facing the associated criticism. Questioning the workability or costs of Obamacare for example were often met with charges that the critic “could not stand to see a black man in the White House.” Whether the charge of racism was sincere or not, it usually worked to shut down any debate. Charles Rangel once said that Republicans talking about tax cuts was code for the ‘n-word.’ Joe Biden told a black audience that Republicans want to “put y’all back in chains.” Hillary Clinton expanded the race card to include all kinds of other false charges against tens of millions of Americans when she said half of Trump supporters were “racist, sexist, homophobic, xenophobic, Islamophobic” and then for good measure to make sure to include all of those other ‘deplorable’ things Republicans are, she threw in the catch-all, “you name it.” 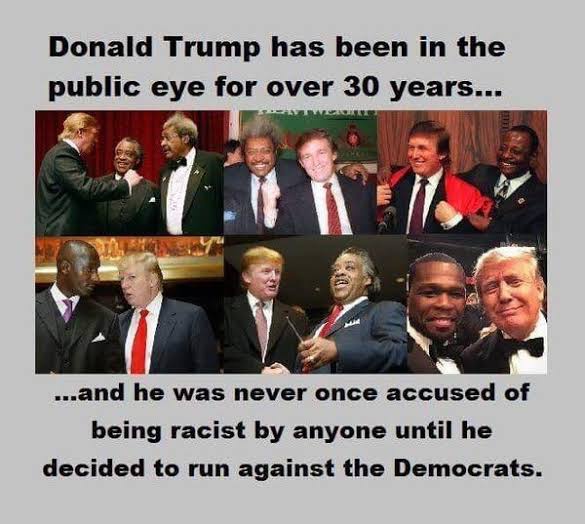 Democrats play race cards so reflexively, they throw them out in situations where they don’t even make sense. In the 2018 Senate race, they said that voting for the actual Hispanic in the race, Ted Cruz, over the 100% white guy, Beto, with the Spanish nick-name, was ‘racist’. They said the reason that many many counties which voted twice for Barack Obama, now voted for Trump instead of another white person had something to do with racism. Van Jones called it a ‘white washing.’ Of course, sexism and misogyny were also at play they said. Anything to avoid looking at the real reasons she lost.

Since the election, there have been a thousand false charges of racism made (documented on WhatHappened.com/tag/fake-racism, as the race card is the Democratic Party’s weapon of choice. Like any drug, after using the race card daily for about a decade, it lost a lot of its power, so in the last few years Democrats had to ‘lace’ it with the phrase ‘white supremacy.’ It’s almost hard to remember but until about four years ago, the term ‘white supremacy’ was rarely used and when it was, it was used almost exclusively in a historical sense referring to a time more than half a century ago when there were actual white supremacists running around (almost all Democrats). Today, the number of actual white supremacists is very close to zero, yet Democrats use that phrase multiple times a day every day, always falsely.

With regard to President Trump, there are a few examples that people always give when asked why they think he is a racist. It is impossible to overstate how often these examples come up. There are individual articles on WhatHappened.com for each of these but here is the quick summary of the debunked myths:

Let’s end with what some prominent African Americans have recently said about President Trump and his alleged racism and what he has accomplished for Black Americans.

NFL legend Herschel Walker at the RNC, “I take it out as a personal insult that people would think I've had a 37 year friendship with a racist... Growing up in the deep South, I've seen racism up close. I know what it is and it isn't Donald Trump.”

Jack Brewer, NFL team captain, college professor, and coach at the RNC, “I know what racism looks like. I've seen it firsthand. In America, it has no resemblance to President Trump and I'm fed up with the way he's portrayed in the media.” Brewer addresses being called an 'Uncle Tom' by Democrats who demand that Black people do as they say or be vilified. “After working as a loyal and motivated advocate for Barack Obama,” Brewer realized nothing really got done. “The president that I voted for twice was approaching the end of his presidency and had still done nothing to pass real criminal justice reform. I then learned that his vice president [Biden] was one of the drafters of the 1994 crime bill that systematically incarcerated millions of black fathers. Eight years came and went. ‘Hope’ and ‘Change’ came and went. Two terms of a president who was supposed to look out for Black Americans came and went.” “We were gathered to celebrate the historic achievements that President Trump has secured for black Americans. From resurrecting American inner cities with Opportunity Zones to record-low unemployment, rising wages, criminal justice reform, record-high funding for HBCUs, and fighting for school choice, President Trump has accomplished what Democrat politicians have long promised — and failed — to deliver. That is why I proudly called President Trump the first Black President — not because of the color of his skin, but because of the content of his administration’s victories. He is the first president to have a real agenda for Black America.”

Martin Luther King Jr.'s niece Alveda King on people calling President Trump a racist, “All of that news is absolutely fake.” “He's not a racist, absolutely is not, and the programs that he has moved forward... is helping African Americans.”

Georgia Democrat Vernon Jones wrote a recent article, 'Trump Did More for Black Americans in 4 Years Than Biden Has in Over 40'  When Jones decided to back Trump in 2020, he said, “President Trump's handling of the economy, his support for historically black colleges and his criminal justice initiatives drew me to endorse his campaign. There are a lot of African Americans who clearly see and appreciate he’s doing something that’s never been done before. When you look at the unemployment rates among black Americans before the pandemic, they were at historic lows. That’s just a fact.” “I refuse to be another one of Joe Biden's ‘black friends’. What has he done for black people in this country? Author a crime bill that disproportionately put us behind bars that @realDonaldTrump had to undo?”

Civil Rights figure Clarence Henderson speaking at the RNC. “These achievements demonstrate Donald Trump truly cares about black lives. His policies show his heart. He has done more for black Americans in four years than Joe Biden has done in 50.”

Actor Isaiah Washington praises President Trump for supporting the black agenda far more than President Obama did. “I voted for 44 twice... Not once in 8 years was I given any support regarding Africa or the Black Agenda, but 45 invites me to the WH to celebrate the #FirstStepAct.”

Larry Elder wrote an article titled, “If Trump is 'racist,' he needs to go back to racism school.” Elder runs through all of the things Trump has done which helped the black community showing that if he is a racist, he sure is not acting like one.

Horace Cooper wrote a book called ‘How Trump is Making Black America Great Again: The Untold Story of Black Advancement in the Era of Trump’ “This book goes on to argue that President Donald Trump offers a far better alternative to liberalism for what ails Black America.”

Conclusion: There is no evidence that President Trump is a racist and plenty of evidence to the contrary. President Trump has done more for black Americans than President Obama, Vice President Biden and the entire Democratic Party has in the last several decades.