Whenever people are asked for evidence that President Trump is a racist, the same few examples are usually given. One of the top examples is always that Trump called White Supremacists “very fine people” in Charlottesville.

The Charlottesville lie is the claim that President Trump said White Supremacists were “very fine people”. Of course, someone who claimed that white supremacists and neo-Nazis were “very fine people” would be a racist. Democrats want you to believe that he said it and are counting on you accepting it without looking into the details.  They also expect you not to notice that the claim itself is not even plausible; i.e. that he would be dumb enough to say such a thing out loud even if he believed it (and of course he does not).

On August 11 and 12, 2017 there were protests in Charlottesville, VA over the possible removal of the Robert E. Lee statue. Some groups of white supremacists and neo-Nazis used this already existing event to stage their own rally called “Unite the Right”. When counter protesters like Antifa heard of this, they descended on Charlottesville as well and violence between those groups occurred. One of the white supremacists killed Heather Heyer. In addition to those groups, other groups of people were there lobbying to either keep or remove the Robert E. Lee statue.

Democrats and the mainstream media often take the following Trump quote about Charlottesville out of context: “You had some very bad people in that group, but you also had people that were very fine people, on both sides.” They use this quote to claim he was talking about white supremacists and neo-nazis. Joe Biden repeats this lie ALL THE TIME. In fact it is a center piece of his campaign for President.  One example, “Three years ago today, white supremacists descended on Charlottesville with torches in hand and hate in their hearts. Our president said they were ‘very fine people’.” Elizabeth Warren: “This is a man who, as President of the United States, refers to people in Charlottesville who are white supremacists as ‘fine people’.” Others who have repeated it are Joy Behar, Donnie Deutsch, Madeleine Dean, Chris Cuomo, Maxine Waters and many others.

But when you look at the full context of his remarks, it is clear that he was talking about the normal people who were there to argue for or against the statue’s removal. It’s obvious that “on both sides” meant on both sides of the statue debate but you don’t even have to infer that because he outright states without being asked for clarification, “I’m not talking about the neo-Nazis and the white nationalists, because they should be condemned totally.” Why do Democrats and the Fake News Media leave out that part of his remarks? The answer is because it disproves the very lie they want the American people to believe. And it is such a useful lie.

Here are the full remarks in context:

You had some very bad people in that group, but you also had people that were very fine people, on both sides. … You had people in that group that were there to protest the taking down of, — to them — a very, very important statute and the renaming of a park from Robert E. Lee to another name. George Washington was a slave owner. Was George Washington a slave owner? So, will George Washington now lose his status? Are we going to take down statutes to George Washington? How about Thomas Jefferson? What do you think about Thomas Jefferson? Do you like him? Are we going to take down his statute? Because he was a major slave-owner. Now are we going to take down his statute? You’re changing history. You’re changing culture, and you had people — and I’m not talking about the neo-Nazis and the white nationalists, because they should be condemned totally — but you had many people in that group other than neo-Nazis and white nationalists, okay? And the press has treated them absolutely unfairly.

Trump was mocked in 2017 for claiming the statue toppling mentality would ever be extended to the founding fathers like Washington and Jefferson. Yet he was proved right just a couple of years later in 2020.

Back to Charlottesville: two days later he condemned them again and honored Heather Heyer.

As I said on Saturday, we condemn in the strongest possible terms this egregious display of hatred, bigotry, and violence. It has no place in America, and as I have said many times before, no matter the color of skin, we all live under the same laws, we all salute the same great flag, and we are all made by the same almighty God. We must love each other, show affection for each other, and unite together in condemnation of hatred, bigotry, and violence. We must rediscover the bonds of love and loyalty that bring us together as Americans. Racism is evil, and those that cause violence in its name are criminals and thugs, including the KKK, neo-Nazis, white supremacists, and other hate groups that are repugnant to everything we hold dear as Americans. We are a nation founded on the truth that all of us are created equal.  We are equal in the eyes of our Creator.  We are equal under the law.  And we are equal under our Constitution.  Those who spread violence in the name of bigotry strike at the very core of America. Two days ago, a young American woman, Heather Heyer, was tragically killed.  Her death fills us with grief, and we send her family our thoughts, our prayers, and our love.

These kinds of statements are consistent with other statements President Trump has made about white supremacists, such as these remarks on August 5, 2019 following the mass shooting in El Paso, Texas:

In one voice, our nation must condemn racism, bigotry, and white supremacy.  These sinister ideologies must be defeated.  Hate has no place in America.  Hatred warps the mind, ravages the heart, and devours the soul.

There are other examples of Trump condemning racism and white supremacy but time and time again, Democrats and the Fake News Media claim that he praises them. This lie has been debunked dozens of times and it is debunked again here. If you fall for it now, you simply want to believe it regardless of the facts.

The good news is that in this nation of over 330 million people, the number of “real” white supremacists at this point could probably fit in one person’s backyard even though Democrats falsely call everything and everyone “White Supremacy”. WalkAway Movement founder Brandon Straka makes this point in the following tweet. 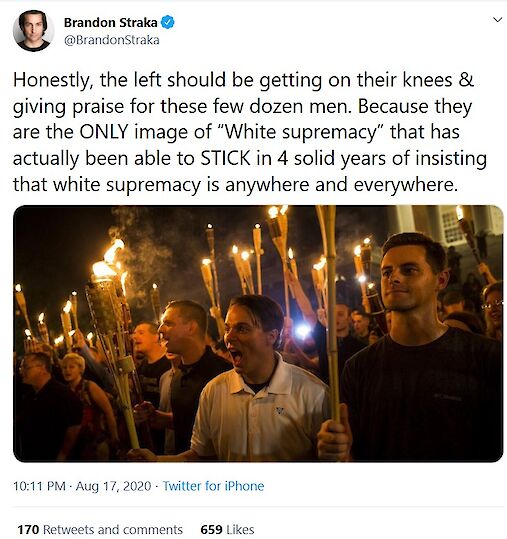 The Democrat’s other technique is to spotlight people like David Duke and Richard Spencer who NO ONE pays attention to EXCEPT THEM. They pay attention to them only because they want to tie them to Trump and then by extension Trump’s supporters. But they have almost no actual following. Most Trump supporters have never heard of them and those that have condemn them. Trump has condemned them and doesn’t know them. Contrast that with President Obama who can be seen here all smiles next to Louis Farrakhan. Farrakhan is openly racist, anti-LGBT and Anti-Semitic. 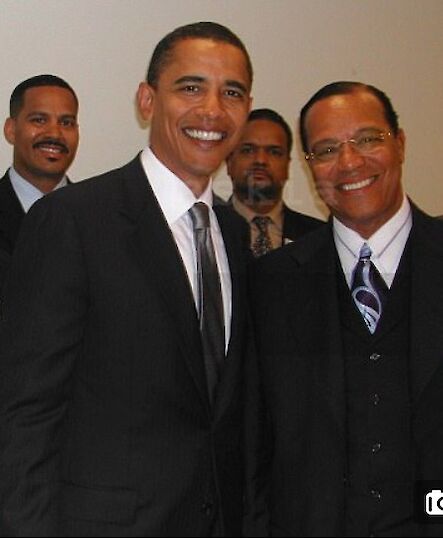 Farrakhan has called Hitler “a very great man”, has called Jews “termites” and has said,
“'It's the wicked Jews that are promoting lesbianism, homosexuality. Jews were responsible for all of this filth and degenerate behavior that Hollywood is putting out, turning men into women and women into men.” He’s said “White people are potential humans. They haven’t evolved yet.” He said “White folks are going down. And Satan is going down. And Farrakhan, by God's grace, has pulled a cover off of that Satanic Jew, and I'm here to say your time is up, your world is through.” 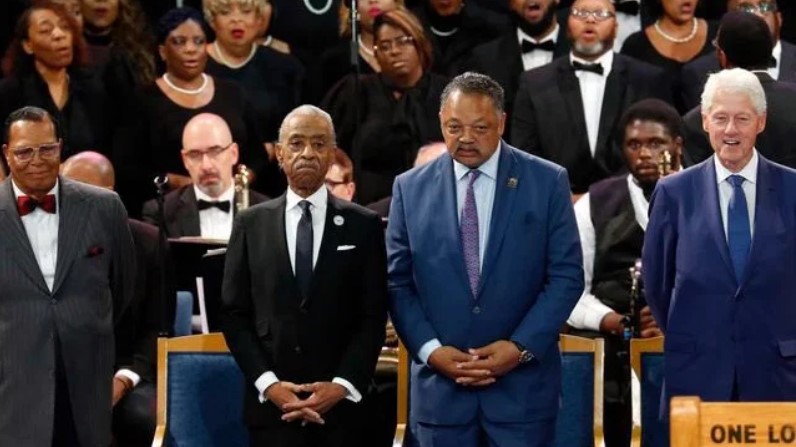 In summary, prominent members of the Democratic Party including former Presidents stand and pose with open racists and Anti-Semites but they are never called racist or Anti-Semitic. Democrats and the Fake News Media try to tie Trump to racists that he’s never even met and has condemned. Textbook fake news.

Post Script: While Trump’s “very fine people” quote turned out to be a huge misrepresentation, it turns out that Biden has his own real “fine people” moment. Biden called the United Daughters Of The Confederacy, 'an organization made up of MANY FINE PEOPLE who continue to display the Confederate flag.' Video is easy to find on YouTube.

Post Post Script: Richard Spencer (who Democrats consider to be a very important figure) endorses Joe Biden in the 2020 election. Therefore, according to the narrative we’ve heard for years, this endorsement proves that Biden is a racist or at least that racists like him.

10/1/2020 Addendum: After the first debate with Joe Biden, a fake but very popular Fake News narrative is now virally claiming that President Trump refuses to denounce white supremacy. Yes, this again. Moderator Chris Wallace asked him (for no apparent reason since another aspect of the fakeness of this narrative is that there is almost no real white supremacy out there), “are you willing tonight to condemn white supremacists and militia group and to say that they need to stand down.” President Trump responded, “Sure, I will do that.” And then correctly pointed out the fake narrative being smuggled in here, “I would say almost everything I see is from the left wing not from the right wing.” That is absolutely correct. 99% (at least) of the violence we’ve seen in the past 3 months from cities burning, to police being attacked and killed, to innocent people being harassed, attacked and killed, to businesses being destroyed and looted, to billions of dollars in property damage has come from Democrats and other left wing groups like Antifa and Black Lives Matter.

President Trump asks who they would like him to denounce. Biden says, “Proud Boys” and so  Trump does but then later admits he has no idea who the Proud Boys are. It turns out that the Proud Boys are not a white supremacist group at all. They have members and leaders of all races and sexual orientations. In fact, the national chairman of the Proud Boys, Enrique Tarrio is a Cuban American and the Florida state director of the political support group Latinos for Trump. Soon after Biden falsely claimed that the Proud Boys were a white supremacist organization, he claimed that “Antifa's an idea, not an organization.” That “idea” he so casually dismissed sends police to the hospital nightly, has attacked and killed innocent people and has destroyed tons and tons of property including police stations and court houses. And Biden wasn’t done. The next day, his campaign tweeted, “the President of the United States refused to disavow white supremacists on the debate stage last night” above a picture of Kyle Rittenhouse’s picture, a kid who is also not a white supremacist. Rittenhouse’s lawyers are going to sue the Biden campaign if he does not retract this obvious falsehood.

Just like with the Charlottesville Hoax, the insanity continued for days possibly culminating in peak idiocy when John Roberts asked Kayleigh McEnany if the President is willing to make a “definitive statement” “Does the President denounce white supremacism and groups that espouse it in all of its forms?” McEnany explained that Trump has done already done that “more than any other President in modern history” as recently as just yesterday AND the day before. She then read him quotes of several other times he has done it (including some of the quotes in this article). Bizarrely, Roberts kept asking her to denounce it and she kept saying she did and “The President has denounced this repeatedly.” But the Fake News just keeps ignoring all of that and keeps asking why he won’t denounce it and keeps claiming that he refuses to denounce it. The Fake News keeps getting faker. Wake up and Walk Away!