The Ukraine Hoax - The Impeachment of President Trump

Anyone who thinks the Impeachment of President Trump has something to do with a phone call to Ukraine in 2019 could not have been paying much attention to politics since the 2016 election. President Trump has pointed out more than once that the Washington Post ran an article called ‘The Campaign to Impeach President Trump Has Begun’ just 2 hours after he was inaugurated on January 17, 2017. But you can go back even farther because the Democrats were planning to impeach him as soon as he was elected in November of 2016.  In December of 2016, Vanity Fair ran an article titled 'Democrats Are Paving the Way to Impeach Donald Trump.’ Did they have a time machine that allowed them to know he would commit an impeachable offense in 2019?

No, Democrats were simply very transparent that they intended to overturn the results of the election and impeachment was just one of the tools they would use. They also openly discussed other avenues such as the 25th Amendment, the Emoluments Clause, the Logan Act, conspiracies involving Russia and even plans to persuade electors to vote against the people of their states (faithless electors). Martin Sheen led a group of other celebrities in a video to convince electors to be “faithless electors”.  Rosie O'Donnell called for martial law to delay the inauguration: “FULLY SUPPORT IMPOSING MARTIAL LAW - DELAYING THE INAUGURATION.”  Sarah Silverman called for a coup: “WAKE UP & JOIN THE RESISTANCE. ONCE THE MILITARY IS W US FASCISTS GET OVERTHROWN. MAD KING & HIS HANDLERS GO BYE BYE.”

Many of these avenues were long shots, leaving the impeachment process as the most viable option to nullify the election results. They searched tirelessly for the right pretext. Over 100 sham reasons were thrown up against the wall with four of them even being voted on in the House of Representatives. Most were not well thought out. Representative Maxine Waters said that Trump must be impeached for using the phrase 'Crooked Hillary' because “calling Hillary crooked, the ‘lock her up, lock her up,’ all of that was developed I think that was developed strategically with people from the Kremlin, with Putin!” AND, she pointed out that this was going on while “Putin is continuing to advance into Korea.” Representative Al Green implored his fellow House Democrats to vote to impeach because, “'I'm concerned that if we don't impeach the President, he will get reelected.”

The Special Council investigation proved the Russian Collusion charge to be a hoax and worse – documents were altered and lies were told to illegally obtain FISA warrants used to spy on the Trump administration. And even so, no collusion was found. Despite Representative Rashida Talib promising publicly in 2018, “We’re going to impeach the motherfucker!” and selling “Impeach the MF” t-shirts, three bogus articles of impeachment that made it out of the House Judiciary Committee were embarrassingly voted down.

The clock was running out, but they were determined to keep trying. Something must eventually stick. Their next attempt was really bizarre.  They tried to turn a Joe Biden scandal into a Trump scandal, falsely accusing President Trump of doing something that Joe Biden actually did.  That pattern of projection is similar to the “Russia Hoax” when they falsely accused Trump of colluding with the Russians on the election when the reality was that it was Hillary Clinton whose campaign purchased election opposition research on Trump from foreign sources like ex-MI6 Christopher Steele who himself loaded up that oppo research with intel from foreign governments including RUSSIA. Ironically, it was Hillary Clinton’s campaign that engaged in the actual “Russian Collusion.” After obsessing over the Russia Hoax for two years, Democrats instantly moved on. 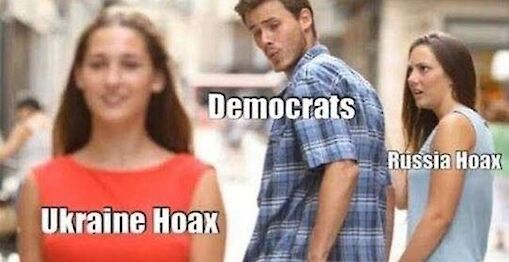 What is the Joe Biden scandal that Democrats attempted to project onto President Trump?  In Feb of 2014, Joe Biden was named 'point man' on Ukraine by President Obama. Months later, with no apparent qualifications, Joe Biden’s son Hunter was put on the board of the Ukrainian gas company Burisma for $600K a year. Democrats assume (or assume you will believe) this was just a coincidence. No one really would have noticed Hunter’s interesting career path except for the fact that Burisma fell under investigation for corruption.  Joe Biden (in another apparent coincidence involving his son) demanded that the prosecutor investigating Burisma be fired and if that didn’t happen, Biden would ensure that Ukraine would not receive one billion dollars in aid that it was promised from the United States. There is a tape of Joe Biden bragging about it, “I said ‘You're not getting the billion. I'm leaving in six hours. If the prosecutor is not fired, you're not getting the money.’ Well, son of a bitch, he got fired,” Biden laughs.

So, there was Joe Biden bragging about a textbook ‘quid pro quo’ involving a billion dollars of United States money in exchange for firing the prosecutor that is investigating his son’s company. Needless to say, this makes the United States look terrible and corrupt, and it is actually President Trump’s duty to investigate corruption that blatant especially when it becomes well known.  In a phone call between President Trump and Ukraine President Zelensky, Trump asked Zelensky to please look into that. Trump said “Biden went around bragging that he stopped the prosecution so if you can look into it …  It  sounds horrible to  me.”  Trump also wanted Ukraine to look into CrowdStrike because CrowdStrike was the company that investigated the DNC server that was hacked and concluded that it was Russia that had hacked it.  Trump distrusted that result and his instincts were proven correct in 2020 when the President of CrowdStrike testified under oath, “We just don’t have the evidence.”  The DNC never allowed the FBI to investigate the server even though Democrats assured us that “Every intelligence agency” found that Russia hacked the DNC server.  It turned out that no (not every) intelligence agencies looked at the DNC server. Only CrowdStrike was allowed to look at it. This is a tangent only relevant to the impeachment in that it explains why Trump was asking about CrowdStrike on the phone call.

Based on the report of a ‘whisteblower’, Democrats claimed that it was Trump who committed a quid pro quo by asking Ukraine to investigate a ‘political rival’ in exchange for aid from the United States.  Democrats quickly voted to start impeachment proceedings but immediately looked ridiculous when Trump released the transcript of the phone call. The transcript showed no quid pro quo was discussed and it further came out that the ‘whistleblower’ was not a traditional whistleblower in that he had no first-hand knowledge of the call.  President Zelensky verified the transcript of the actual call and said “Nobody pushed.” “There was no blackmail.” “I had no idea the military aid was held up. When I did find out, I raised it with Pence at a meeting in Warsaw. I told him please help to resolve it. And after our meeting, America unblocked the aid” with no investigation ever being done.  Brit Hume said the situation was at best, “the temporary withholding of aid that was ultimately provided in exchange for an investigation that wasn't conducted.” No quid and no pro, unlike in Joe Biden’s case where there was clear quid pro quo involving a billion U.S. dollars and Biden’s family member.

With these latest revelations, Adam Schiff became desperate. He received Four Pinocchios from the Washington Post for claiming he and his office had not been in contact with the 'whistleblower'.  Then when the actual transcript did not prove their case, Schiff simply read a totally made up version of the transcript on the House floor to make it sound like Trump was saying the things they were accusing him of: “you better listen good. I want you to make up dirt on my political opponent, understand? Lots of it, on this and on that.” Even though Schiff was widely criticized for this stunt, he did it again at another point. Here is Schiff’s made up conversation between Trump and Putin, “I want you to hack Burisma! We couldn't get Ukrainians to do it, You hack Burisma, and you get me some good stuff, then I'm gonna stop sending money to Ukraine.” What a ridiculous, unserious sham. Even worse, Schiff would not allow Trump to call any witnesses to defend himself during the impeachment hearings.  Democrats called three hyper partisan witnesses (none of whom had any relevant first-hand information) but allowed the GOP only one witness, Jonathan Turley, who is a Democrat that voted for Hillary Clinton.  There was no attempt to make this disgraceful process even appear fair.

Even so, the fake transcripts and the lack of an actual case became so embarrassing for the Democrats that Trump declared, “If this were a prizefight, they'd stop it!”  Of course, President Trump prevailed and was acquitted.  Chief Justice John Roberts declared "Two-thirds of the senators present not having pronounced him guilty, the Senate adjudges that the respondent Donald John Trump, President of the United States, is not guilty.”  Constitutional lawyer Alan Dershowitz, another Hillary Clinton supporter said, “Today was a great day for the constitution. The constitution was saved from people who were trying to destroy it and diminish it.”  Those people he was talking about were the entire Democratic Party. 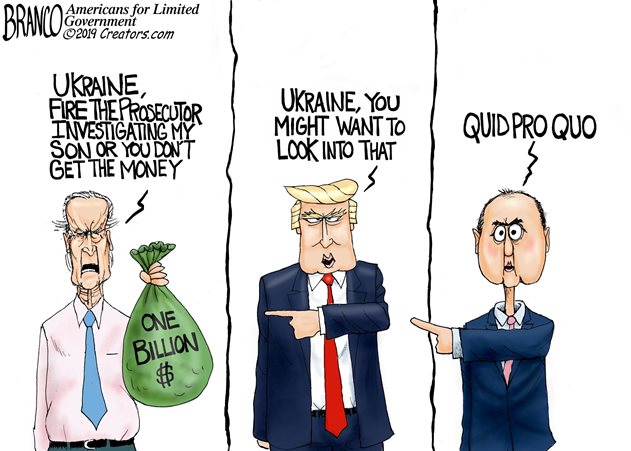 President Trump beat the phony charges but sadly the real corruption of Joe Biden has never been investigated.  How did he get away with threatening to hold up a billion U.S. taxpayer dollars in aid to another country until they fired the prosecutor who was investigating his son’s company? And why was his son even working for that company (other than that it was a plausible coincidence since every American young man dreams of getting a job in Ukraine)? According to Democrats, we don’t need the answers to these questions.  In fact, simply asking the questions is an “impeachable offense” as President Trump found out.