Whenever people are asked for evidence that President Trump is a racist, the same few examples are usually given. One of the top examples is always that Trump said something to the effect that “Mexicans are rapists.”

Many prominent democrats such as Joe Biden, Tim Kaine, Bette Midler, and Spike Lee have misquoted the above quote to claim that Trump said, “All Mexicans are rapists”. All.  Biden also extends the fake quote to Trump’s supporters as well.  “They really support the notion that, you know, all Mexicans are rapists and all Muslims are bad”. (Actually, not a single person supports those “notions” but let’s stay on track). Many democrats drop the “all” from the quote knowing at least that part is false but still represent the quote as Trump saying “Mexicans are rapists” which is also not what he said.

Those two false forms of the quote have been repeated an uncountable number of times. They are frequently repeated even now in 2020, often being used as proof that Trump is a racist. But is the (real) quote racist? Not at all. Many Mexicans have said the quote is not racist, as would anyone who fairly reads the actual quote instead of the democratic party’s false version of it.

“They’re not sending their best”. This means, Mexico has a “best”, a “worst” and everything in between. Just like each and every other country. Trump is talking about a subset of Mexicans that illegally cross the U.S. border. He’s highlighting some of the problems that illegal immigration brings with it.

32% of federal prisoners are aliens, and of those, over 90% of those are in the country illegally. A John Lott paper called 'Undocumented Immigrants, U.S. Citizens, and Convicted Criminals in Arizona' showed that undocumented immigrants are at least 142% more likely to be convicted of crime than other Arizonans – 163% more likely to commit first degree murder than are U.S. citizens. According to DHS, ‘DHS prevented 3,755 known or suspected terrorists from traveling to or entering the U.S. in FY 17. That's in addition to 17,526 criminals, 1,019 gang members' in 2017 alone. (Note, DHS is another agency Democrats currently want to “defund” because ACAB.) These are legitimate problems created by the lack of vetting ability that illegal immigration brings. None of this comes close to claiming that ‘immigrants’ in general (or Mexicans) are criminals or are more likely to be criminals than non-immigrants (or non-Mexicans). The claim is simply that people who illegally immigrate to the U.S. are more likely to be criminals than people who legally immigrate. This should be uncontroversial and unsurprising.

What about the “rapist” claim?  Certainly, that is just a random insult and so is proof of racism? It turns out that the claim is based on a very real problem associated again, with illegal immigration, not with Mexicans as a people. As reported by Eleanor Goldberg in Huffpost, “According to a stunning Fusion investigation, 80 percent of women and girls crossing into the U.S. by way of Mexico are raped during their journey. That’s up from a previous estimate of 60 percent, according to an Amnesty International report.” Trump is correct that by stopping or minimizing the flow of illegal immigration, many of these rapes will be prevented.

This article is a good place to highlight how fake the Fake News can be by using Illegal Immigration as an example.  No misrepresentation is too low when trying to falsely smear Trump as a racist or xenophobe. Watch how they all in lockstep (except Fox and other conservative sites) completely and intentionally misrepresent a situation. In May of 2018, Fresno County Sheriff Margaret Mims was talking to President Trump specifically about MS-13 gang members. MS-13 is a very violent and murderous gang that kills in especially brutal ways. They terrorize mostly minority neighborhoods and Trump’s crackdown on the gang has helped those neighborhoods tremendously.

Sheriff Mims said to President Trump , “There could be an MS-13 gang member I know about, if they don’t reach a certain threshold, I cannot tell ICE about them.” Trump responded, “You wouldn’t believe how bad these people are. These aren’t people, these are animals, and we’re taking them out of the country at a level and at a rate that’s never happened before.” He was clearly and obviously talking about MS-13 gang members. It is simply not possible to honestly claim that he was talking about immigrants in general.

So how did the Fake News media represent the exchange? They almost all claimed he was talking about “Undocumented Immigrants” or even just “Immigrants” in general. Only Fox News provided the accurate context. Look at breathtaking level of dishonesty in these headlines and descriptions. In addition to the blatant lies they are telling below, not one of them even mentions MS-13. 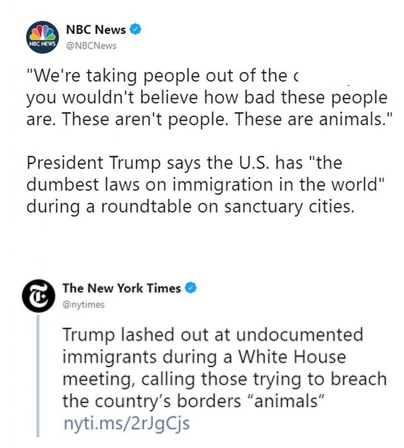 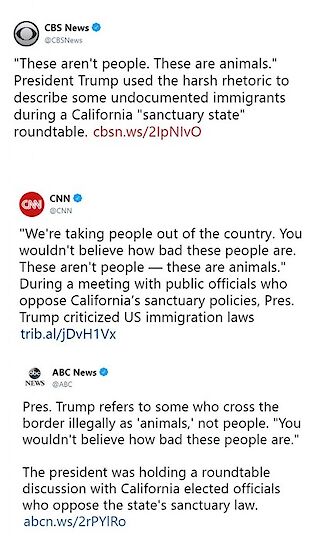 These ‘News’ organizations should be ashamed of themselves and shame on those Americans who are not able to see through the blatant and easily debunked lies that are thrown at them every day. The fake news is having the desired effect by generating massive outrage across the nation. Millions of people think they know that Trump called Mexicans rapists and immigrants animals. Trump famously has said that “Fake News is the enemy of the people.” And it is. The Fake News ironically even misrepresented that (fake news about fake news) by claiming he said that the media in general is the enemy of the people. Honest media is not but fake news is. Wake up and #WalkAway.